Hey Guys! As you may have heard, last week I was involved in the Secret7" charity exhibition.


Seven bands chose seven songs (one each) and artists were asked to create work responding to the tracks to be made into limited edition 7" record sleeve covers for vinyls of the tracks. 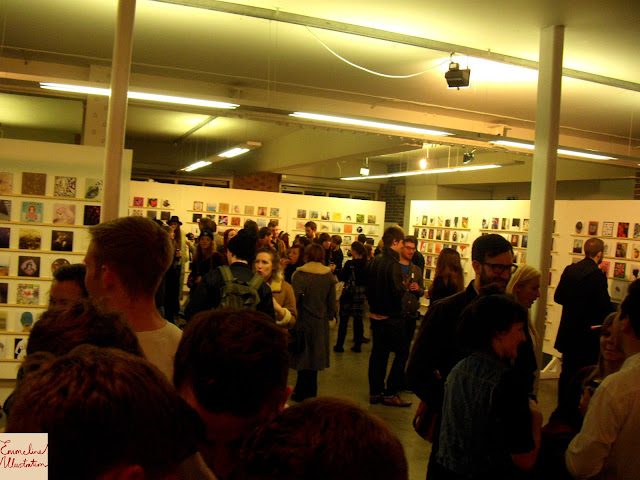 Tuesday the 17th was the private view/opening night for everyone involved and was held in the Idea Generation gallery in Shoreditch. I headed down from Manchester just to go and join in
the exhibition shenanigans.

Although a lot of the artwork entries were through the competition stage of the event, mine was submitted with Ohh Deer - and so I finally met a lot of the lovely, lovely others in the illustration collective and had drinks, and talks, and generally a ton and a half of good times.

The sale of the vinyls turned out to be a roaring success, with over half of them being snapped up within the first day.  It's not surprising really though, there were some blooming fantastic covers (including a few by the likes of David Shrigley!).
HOWEVER! I still don't know if mine did get sold, I'm hoping it did (if you got it let me know!)- but if not it, along with any others that didn't sell during the exhibition - will be put up on the Teenage Cancer Trust ebay later this week and will be sold on there.  It's all about raising the money for charity anyway, so I'll try not to feel too bad if mine didn't sell there!

I hope this was, in fact, interesting for you to read.
If it was, and you're at this point in the blog then I have some good and sort of secret news for you - I've almost finished my second children's book, but the publishers have asked me to do another one and there's the likelihood of another one after that! Yippee! It's good to finally feel a little secure and have some work to keep me motivated.

I hope you're all doing well, keep in touch.

Emmeline
Posted by Emmeline Pidgen Illustration at 18:19 No comments:

Good Afternoon everyone!
I've been a very quiet little lady recently I know - it's been a very busy time indeed.


I've been working on a new children's book 'The New Year Child' with Far Far Away books. It's a great (and slightly odd!) story, very magical and full of stars and space/cloud scenes.
I finished illustrating all the colour pages a few days ago (pending a few changes) and so now I'm indulging in my first days off in over a month and a half- there's so much time now! I'm mostly using it to climb through the pages of 1Q84 into Murakami's world.


I can't really show you any of the artwork at the moment (except these teasers teehee!), but as soon as I can I will of course!

It's been good fun and good for my motivation. I spoke to the MD of the publishers today and we've been talking about the likelihood of other book projects shortly - which is great, great news!


We recently moved into a new little flat (as me and Andrew had been living at his parent's house for 10 months!). It's, well, cosy...but we don't need anything bigger at all. We're slowly filling the place with bits and bobs but our bed is still just a mattress on the floor (everyone comments how Japanese style it is!) and I've been working on a tiny fold out metal table for the entire book.  We did finally get a fridge last week, we'd been using a one foot high camping fridge for about a month and a half - there was an awful lot of food tetris that had to be done there. 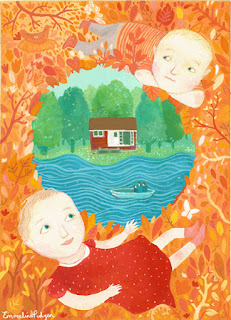 A few weeks ago I was contacted by Amy Millan from the band Stars (incidentally, one of my favourite bands, go and listen to them) who wanted to commission me to illustrate a painting for her daughter and nephew's first birthday.  I felt absolutely honoured to do it and it was really nice to do a full gouache painting, without a hint of digital- back to my roots!  Amy told me when she saw it she cried because she loved it so much. You can't really get a better response than that can you?
I'm really happy with it and it was a lovely commission to work on. Hurray!


That illustration is also now up on my website, as well as some new downloadable tear-sheets of my work (on the about me page) and a photo of my real life face instead of a drawing.
You can also get 10% off all the pretty postcards and sticker sets in my shop with the code SPRING10 until Friday, so let everyone know about that if you can!


Oh! I recently jumped over the 10,000 views on my blog hurdle - that's amazing, thank you all so much for supporting me.


For now, that's all.  I'll hopefully get back into the swing of other illustration work again soon.  There's some hard and very upsetting things going on with my family at the moment so I'm at least going to take a week off to be with them down in Cornwall.  I'm hoping things will get better and I'll post lots of illustration updates for you soon.


Have a lovely week, okay! x
Posted by Emmeline Pidgen Illustration at 18:23 2 comments: