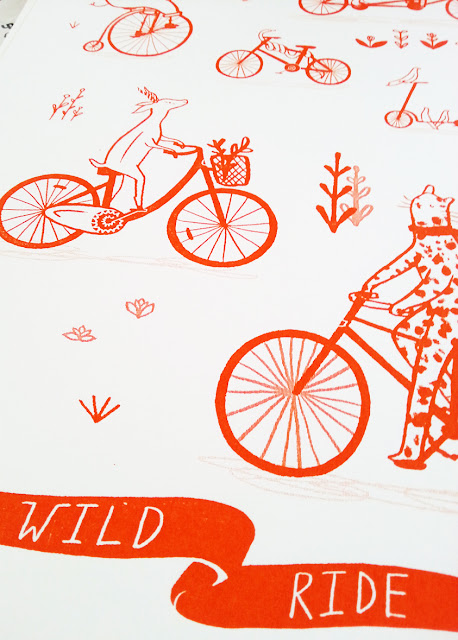 Just to let you know my 'Wild Ride' screenprint for the Artcrank show is now up for grabs in the 2022NQ online shop! Get your mits on a ltd edition, signed and numbered print with a portion of the profits going to Simply Cycling charity.

Get 'em here! http://shop.2022nq.co.uk/product/artcrank-emmeline-pidgen-wild-ride (or if you want to wait: in my shop mid-august)

Prints are a gorgeous bright Orange colour on slightly cream paper. 270gsm, A3 size- signed and numbered in pencil. 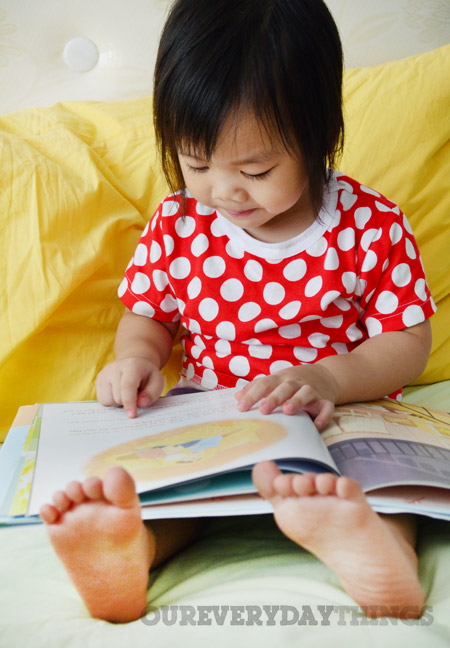 I have to say, seeing photos like this of kids on the other side of the world enjoying a book you've illustrated is SUCH a brilliant feeling.  It's not an easy job (seriously) but this sort of thing makes it worth it. 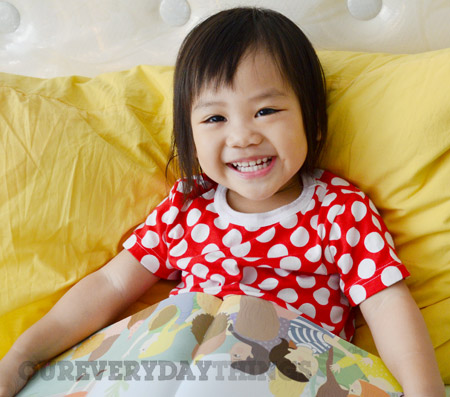 These pictures are from a great little article: Reading with Toddlers and Encouraging Positive Relationships over on OurEverydayThings blog.  It's got a nice little review of my next book One More Candle.  I'm super chuffed that the review focuses on how much the kids loved pointing out and finding all the little details in the illustrations - something that I really thought about when I was illustrating it.

Have a read of the article here: http://bit.ly/13us
One More Candle comes out 1st September 2013.
Posted by Emmeline Pidgen Illustration at 14:08 No comments:

Last Friday saw the launch of the Manchester show from the worldwide art & bike project Artcrank!  Twenty-six local artists were invited to create a set of original screenprinted posters revolving around the themes of bikes, bicycle culture and the love of the ride. 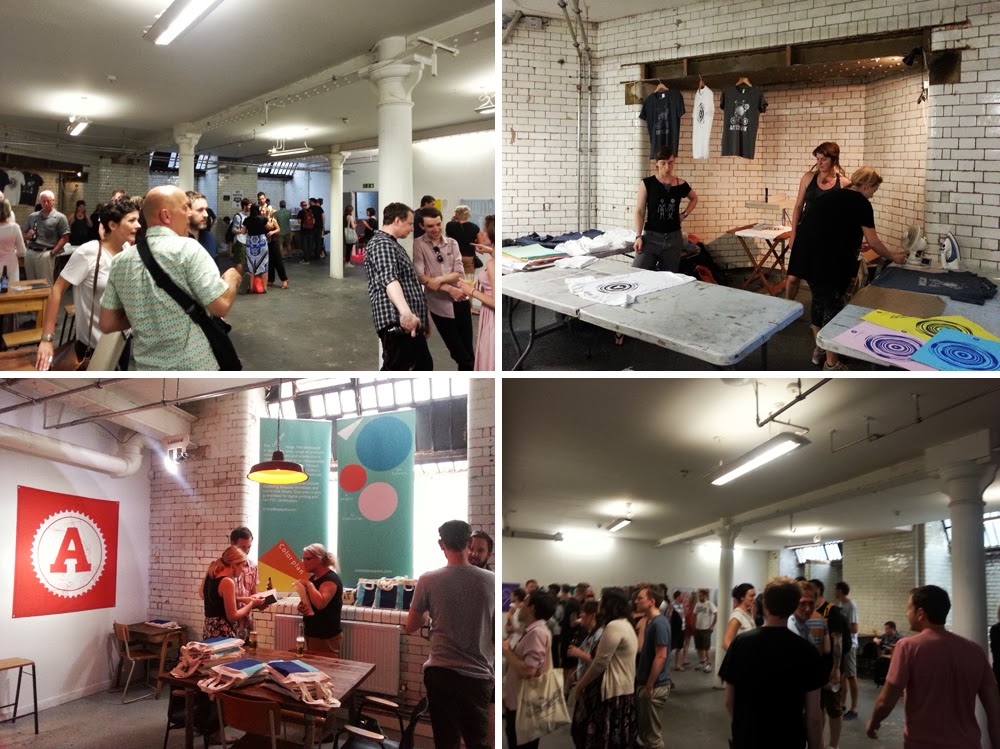 The launch at 2022NQ was a seriously fun evening; with free drinks, DJ's playing tunes, live screenprinting and goody bags from Colorplan stocked full of papery-niceness.
The place was packed and had a really great atmosphere.  All the prints on display looked absolutely awesome, it's always fantastic to be involved in local events and get to know the pools of talent in the area. 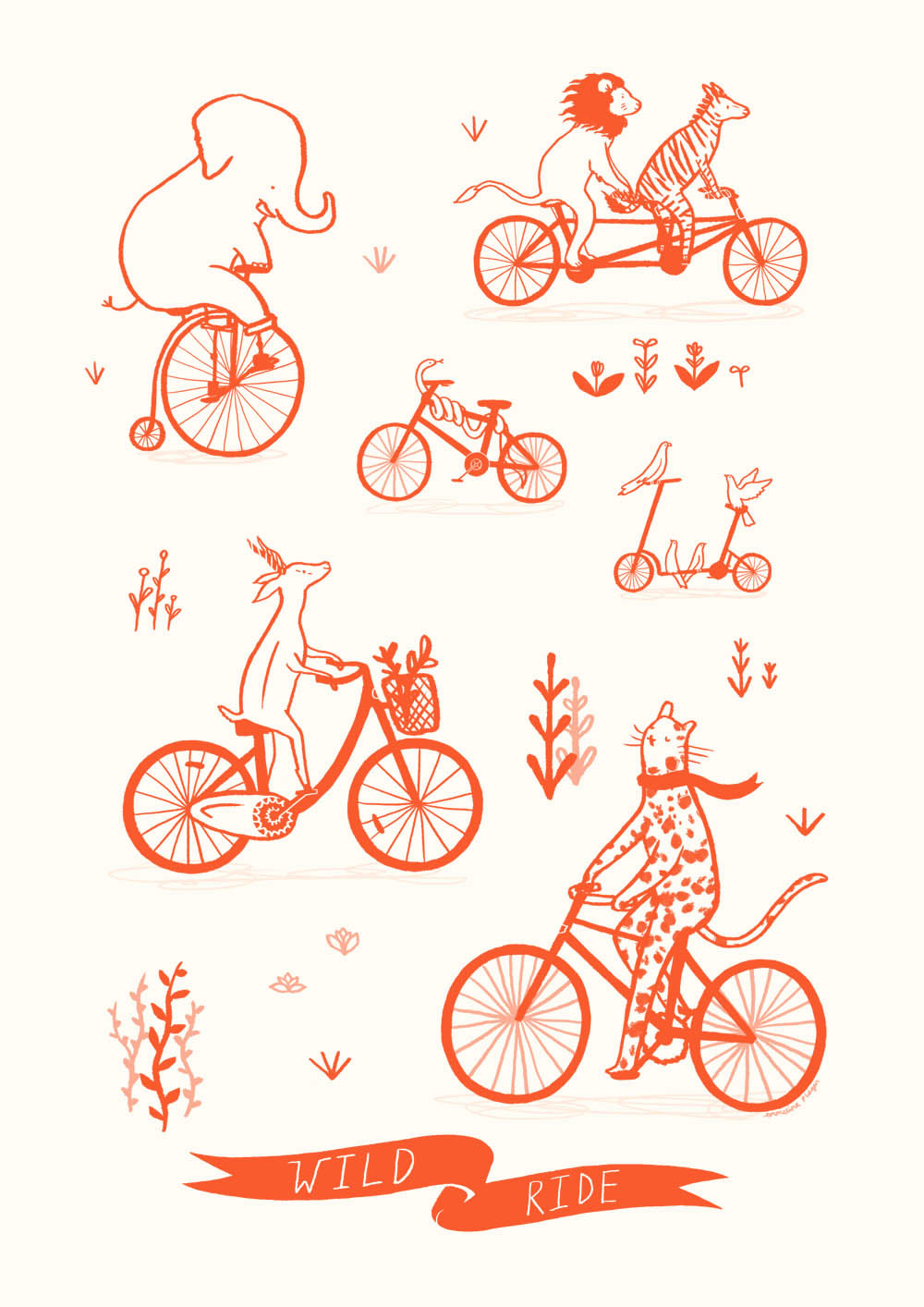 With my poster I wanted to create an illustration with a fun and light feel to it - one for kids and adults, for people's homes.  I'd recently found a drawing of the leopard in an old forgotten sketchbook (yup, I have a lot of those) and that really inspired the idea.  I kept it simple, but with funny little plays like the size of the elephant on the penny-farthing, or the lion almost chasing the zebra on the tandem.  I had the prints screenprinted by the talented Savwo - I'd worked with him before in 2011 printing my Riot Clean Up charity screenprints, which came out amazingly - so it was great to see that these came out so well too! 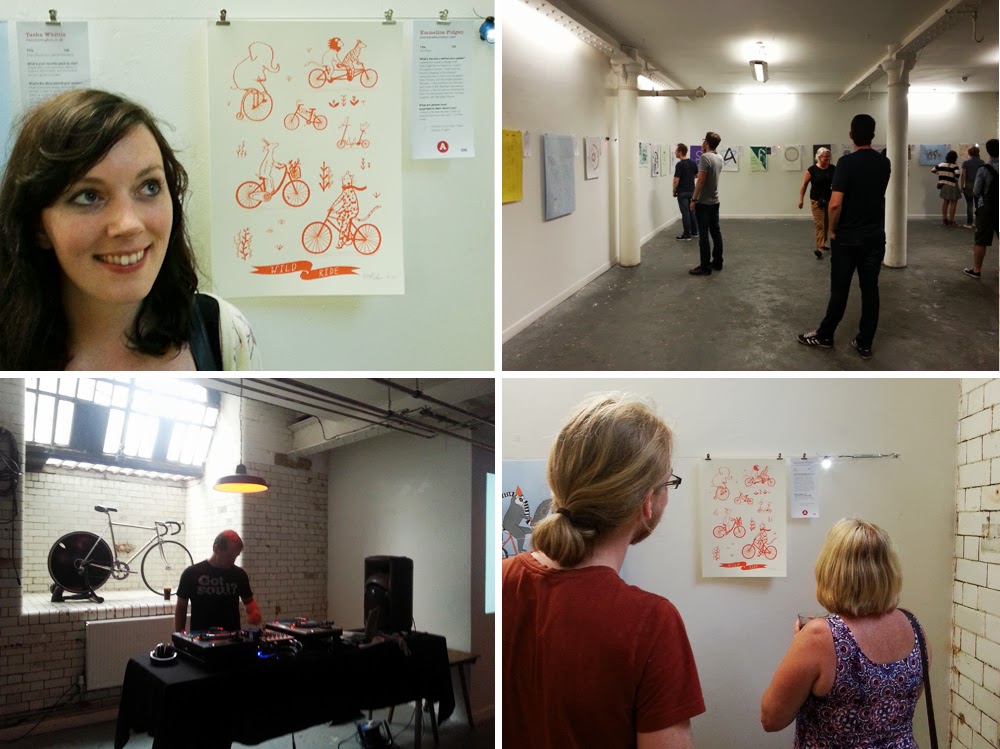 Artcrank has had a number of shows worldwide since their 2007 debut in Minneapolis, but this was the first that had headed to the North of England at 2022NQ Manchester, and they got a really great response.  All the ltd edition posters were on sale for £30, with a portion of profits supporting Simply Cycling, a nonprofit organization that works to make cycling more accessible to people with disabilities.  The show continues until the 5th of August, with remaining posters soon to be on sale on the 2022NQ website.

Big thanks to Artcrank for organising the show, the sponsors Retrofuzz and G F Smith papers, 2022nq for having us and Savwo for printing my posters.  You guys are ace.

If you're interested in nabbing one of my ltd edition & signed prints for yourself I may have a few left after the show, so get in touch!
Posted by Emmeline Pidgen Illustration at 12:14 No comments: 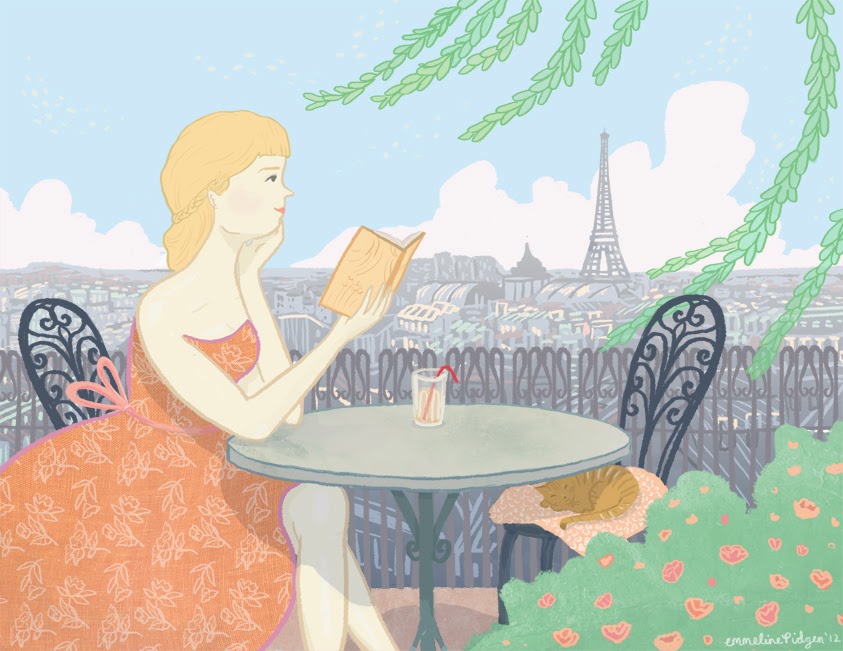 I reworked this old illustration yesterday.  Sometimes it takes a while to be able to distance yourself from the work and view it critically.  I'm definitely a lot happier with it, and in a way it's nice to see that my working style has improved (well, I think so) within a year. Always learning!
Posted by Emmeline Pidgen Illustration at 09:25 1 comment: