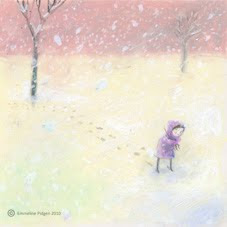 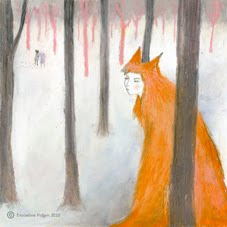 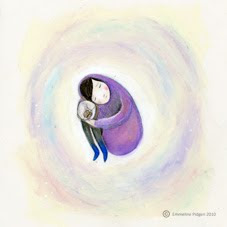 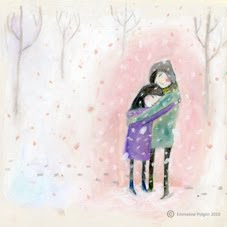 The story's about a little girl at some unspecified point in time who is searching for firewood unsuccessfully.
She meets a little boy who tells her that there's good pickin's of firewood in the forest, but she's been told not to go there.  Well...she goes anyway, and they get caught by an evil forest witch who protects the woods.  The boy begs her not to hurt the girl as he made her go there, so the witch traps the boy in a snowglobe.
The girl grows up treasuring the snowglobe and the boy trapped inside.
She goes back to the witch three times to ask her to release him, and on the third time the witch smashes the snowglobe.
The girl thinks that the boy is dead..but that evening he appears from a snowstorm and they are together and in love forever.
Posted by Emmeline Pidgen Illustration at 15:59