Winning and news and drawings and letterboxes and dinosaurs

Good Morning my internet friends!
I hope you're having a good day so far.


Yesterday I got very excited because finally my silliness paid off with something (-air punch-)
Creative Review were doing a little competition on Twitter for people to write a '#blameitonsomeoneelse' excuse as to why they hadn't entered the CR illustration Annual.
I, other than admitting that I actually couldn't afford the entry fee, said this:


'Well..here's how it is. I was about to enter..when a large white cat, Jeff Goldblum and a tiny wooden horse barged in and demanded I play hide and seek with them. Jeff was really bad at finding us, so I was hiding at the back of the mouldy cupboard for 3 and a bit days and totally missed the entering.'


and I won! Hurray!
This meant that I got free entry into the competition to be in the illustration annual.
I entered my snowy illustration with the boy and the girl hugging (one of the ones I'm most proud of) so here's hoping I'll get in! :-)


I also hit the 1000 follower mark on Twitter, which was a very nice (and weird) feeling! I gave away some cool prizes.


I've done a couple of quick, pretty illustrations recently.  I've been having fun with my new brush pen and working with Photoshop on them :-)
They're both available on Society6 as prints, iphone covers blah blah blah. 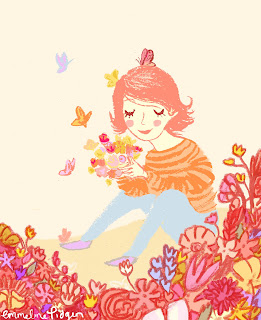 Hmmmrfph, I just caught the postman trying to jam something really important through the letterbox - luckily it's all okay.  Phew.
I'm still working on the children's book, I've had a bit of confusion with extreme changes I've been asked to make and such, but it's all more or less back on track now.
Anyway, come and say hello to me somewhere on the internet.  OR come round for a cup of tea.
It's lonely here with just my pencil, laptop and some wooden dinosaurs for company.
Byebye

Posted by Emmeline Pidgen Illustration at 11:59