IPSE's 15 for 15 Awards, National Freelancers Day 2014 and a bucketful of inspiration. 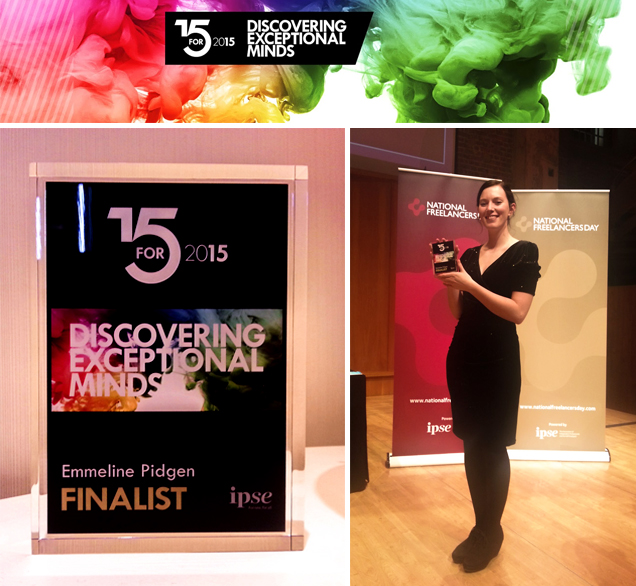 Last week was one of those hectic, exciting and all-round-overwhelming whirlwinds you certainly don't forget in a hurry.  All in all, I spent less than 36 hours in London for IPSE's 15 for 15 awards, but really, it felt like a week!

I trundled down to London bright and early on National Freelancers Day (Wednesday), ready for the awards event at the stunning LSO St. Luke's in the evening.

It was brilliant to see the 15 for 15 finalists again; they're such a fantastic, talented, bunch of people and there was the overarching feeling that, win or lose, we were all in it together.  It's no mean feat to be selected as the "UK's Top 15 Freelancers", the finalists were whittled down from hundreds of entries, and that really showed in the calibre and professionalism of the finalists; they really represent the diversity and determination that's become a staple of the self-employed sector.

The awards event itself was incredible: gorgeous venue, great company, stacks of food (and yes, lots of wine too!).  We ran through a few rehearsals with host Sue Lawley, networked with a canapé reception and then kicked off the evening with the awards.

The whole night was being broadcast, with thousands watching online, and linked events in Manchester and Edinburgh - so I won't deny the butterflies onstage.  Whilst I didn't scoop the very top prize, I came away from the awards with so much inspiration, confidence and new knowledge I couldn't be happier to have taken part.

The night continued with a National Freelancers Day panel talk with Sue Lawley, Declan Curry, Emma Jones MBE, Nick Ferrari, Nick Boles MP and Toby Perkins MP.  There were some really illuminating insights into the political and economic aspects of freelancing, as well as some strong (and incredibly encouraging words) about what should be done to support and develop freelance practice over the coming months.

As you know I'm so passionate about making sure we, as self-employed people, have the best support, encouragement and knowledge behind us as we venture through the freelance jungle.  It was great to hear that tides are shifting in our favour, and that the time has come when the government can't overlook us, or neglect to acknowledge that we're such a strong and rapidly-growing workforce. Founded by creative, ideas-driven people; we deserve to be listened to.

A guest of honour at the awards was the newly government-appointed Tsar of Freelancing David Morris MP. I had the opportunity to speak to him after the ceremony, and discussed some of the ideas that I thought really had merit for freelancers: ensuring space for small businesses to co-work and thrive in every community, and tougher laws on late payment from clients.

I've encountered and suffered from both of these issues in my freelance work, and I know that many others are in the same position.  I'm so glad to see the shift in focus towards these sort of problems, and I have personally been in touch with my local council to encourage the use of unused space to support freelancers, small businesses and graduates as a co-working environment.

Telling people "I spoke with the Tsar, appealing for the rights of freelancers across the land!" sort of makes it sound like a fairytale (bit of a shame I didn't get granted three wishes, eh?). But the conversation was indeed very hopeful, and having discussed some of the issues I've personally faced, and talking strategy with the Tsar, it's great to feel I have the British Government backing me up!

IPSE definitely looked after their finalists, and we were lucky enough to stay in the gorgeous Citizen M hotel near London Bridge. I won't ever say no to a wall-to-wall window or a lamp-lit reading lounge, no siree. I probably spent far too long adjusting the colour changing lights in the room!

We also got taken out for a tour around tech-city (really interesting!) and a pizza-fueled lunch (hurray pizza!).
But to be honest, my favourite part of the experience was just the chance to really get to know the other finalists. I've got a whole notepage full of ideas and connections to follow-up on from chats with the others; there's always that spark of inspiration from meeting people with the same drive and passion as you, but in completely different fields! It's always worth grabbing every opportunity you can get to learn from other people, share insights and step away from the ol' desk!

I'm definitely going to be a busy girl this coming year. 2015's going to be a good one, I can tell!
Posted by Emmeline Pidgen Illustration at 16:00